Here is my take on the sketch.

Pattern papers from Kaisercraft Bubblegum Hills collection, cardstock from SU, Tim Holtz’s distress ink for inking the edges, sentiment stamps and button from Papertrey Ink, ribbon from my stash and rhinestones from Kaisercraft.
If you are interested to play along, then click here to go to Sasya Sketches blog.
Have a great day!
Luv!

March 29, 2011 Handmade By G3
I so wanted to tell you about the interesting weekend I had. My parents are here with me and we planned to drive them down to a coastal town called Esperance. Its a beautiful town with shallow turquoise beaches and white squeeky sand. A great place to getaway and relax if we ever want a break. Now we are six of us and we could not get a car hire which will accomodate all of us. So we drove in two cars. Kids were with me and parents with my DH. It was a 400kms exhausting drive one way.  We reached on Friday night. Settled into the apartment resort, had dinner and went to bed straight away. At 2.00 AM in the morning, the fire alarm goes off!!!! Disoriented, we pick up our handbags/wallet and the keys and rush out. The firemen took half an hour to come. But by then, nothing happened. No smoke, no fire, nothing!  There were atleast 10 families waiting for the firemen to give us the all clear. By then we knew it was a false alarm. We then went in to sleep but the men in the next apartment were arguing and swearing. Gosh!  atleast 6 to 10 swear words in a sentence?  We could hear it all! So inappropriate for kids. We had to knock on the wall and shut them down.
In the morning, when we went to complain about them and we discovered they were the one who broke the fire alarm in a drunken fight. And to top it all they too evacuated and stood with all of us at night waiting for the firmen to arrive and give all clear. Not a word that they did the deed! We were so angry! But fortunately they were charged and kicked out of the apartment resort!
This was the first time for me with the real firealarm going off. I have done fire drills at work and school but this was totally different. I was actually scared that the entire apartment resort was going to go up in flames. My parents panicked! Kids were disoriented. So there goes my night sleep!!!!
Exhausted and tired in the morning, we went  for a cruise. Well, guess what? I am not sea worthy at all. I was sea sick and had a terrible time for the rest of the day, while rest of them had a great time 😦   Then, in the morning we went to an animal farm and later drove back. While nearing my town, I had colorful lights flashed and stopped by the police. I was like, Nooo now what? I was speeding! Gosh, by how much?  Just 3 kms. I know I should have been careful. I felt worse than ever. I was heading towards 110 sign from 90 and so was accelerating. No excuse at all I know 😦 Thankfully the policemen gave me a warning only. So relieved, I reached home and slept peacefully that night. Monday was a day to recover and back to the routine now.
I told you, my weekend was interesting and eventful and exhausting!!!!  I wanted to share it with you all. Especially, how scary it was to be stopped by the police 😦 First time for me 🙂 Certainly a weekend to remember for the rest of my life 🙂 I have always felt sad leaving that town and get back home to the routine but this time I felt like all I wanted was to get back home and into the routine. Thankfully my parents enjoyed the trip. Never have I rambled so much. Feels good having let it all out. Thanks for reading and listening:)
Have a great week!
Luv!

March 29, 2011March 20, 2017 Handmade By G3
Hi everybody, It feels long since I have blogged. Looking back, I did blog last Thursday! Thats not long ago but I feel so because I was away for the weekend and then took a day to recover from the long driving trip. We took parents to see a small coastal town called Esperance. Its about 400 Kms away from my town and I had to drive 800kms to and fro. It was a very eventful trip I will talk about it later. It is interesting I can assure you that 🙂
Anyway, I have a card today I made for Card Patterns Sketch #108. Here is the sketch for you.

Here is my take on the sketch! I turned the sketch around for my card.

I have used Prima Marketing pattern paper and stickers, MFT dies, SU cardstock, Kaisercraft rhinestones and pattern paper and Papertrey Ink stamps for sentiment.
I am loving trying out vintage and pastel colors on my cards. Also the layers make the card pretty. Hope you like it too. Have a great week 🙂 and thanks for stopping by!
Luv!

March 24, 2011 Handmade By G3
Here is another sketch from Sasya Sketches. This is a versatile and beautiful one. 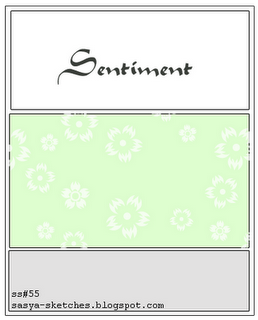 And here is my take on the sketch. 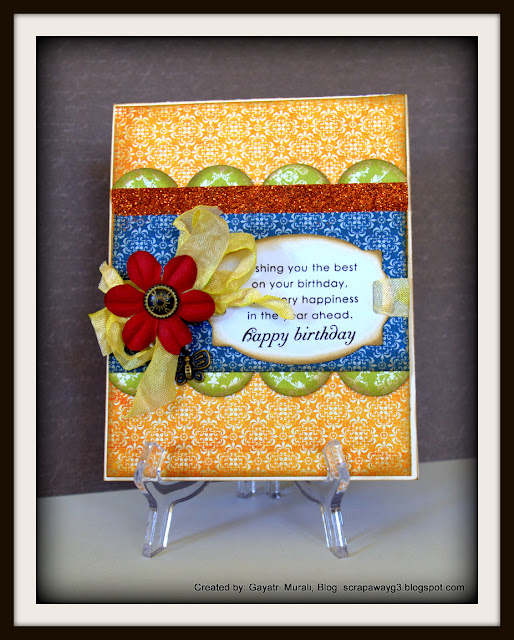 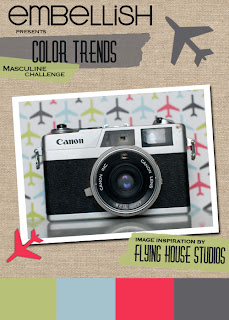 Masculine card! Thats always a challenge for me. I have a tween son and making a card for him is just so difficult. I start to make a card for him and end up making a baby boy card. Well, he is my baby but…. lol! Hard for a mom to accept her baby is all growing up to be a teen now 🙂
Anyway,my son plays guitar and I searched and bought a couple ” boy playing guitar”stamps. And when I saw Embellish’s Masculine challenge, I jumped  at  the opportunity and actually made a card for my tween son. Here is my card. 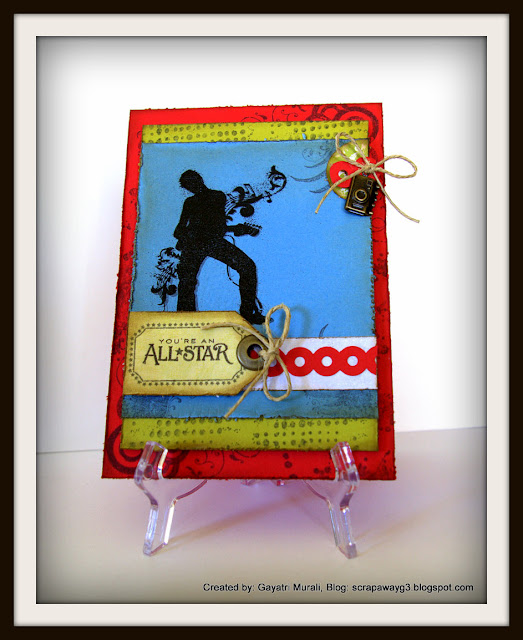 I have used stamps from Inkadinkado, Papertrey Ink and Stampin’ Up!, cardstock from Stampin’ Up!, Martha Stewart’s border punch, PTI’s music impression plate, Edge distressor, Tim Holtz’s Frayed Burlap distress ink and linen thread from SU. I have embossed the main image and stamped the rest of the image with Basic Gray ink from SU. The camera charm is from my stash.
Truly masculine! don’t you think? I like how it turned up:)
Here is a close up! 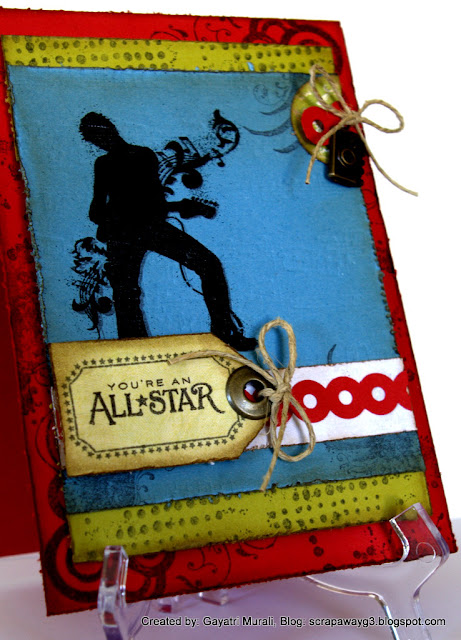 Thanks for stopping by!
This is my second post for today. Go to “Home” and scroll down for more 🙂
Luv!

March 22, 2011 Handmade By G3
today because I found out that my card below made it to Super Six on Card Patterns Blog for Sketch #106. 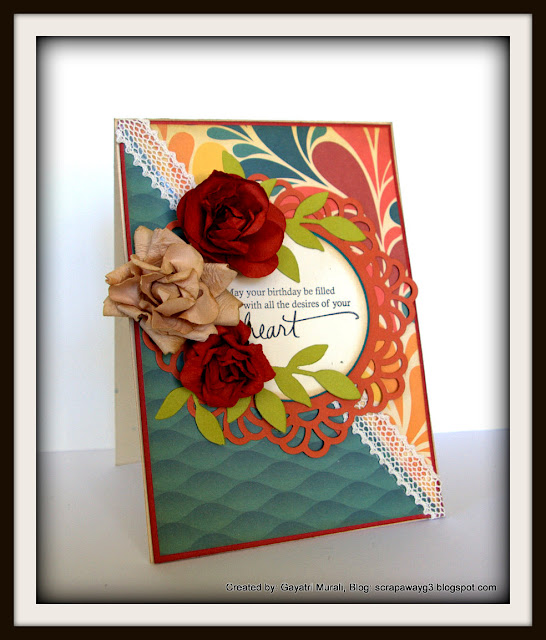 My card also made it to the first two who will be given the opportunity to make a card for sketch 108. I am excited. What a sweet surprise I had this morning! Thanks to all the ladies at Card Patterns Blog to choosing my card. I am honoured 🙂
Luv!

March 20, 2011 Handmade By G3
Morning everybody, Monday morning for me here in Australia. I am sipping my cup of coffee and writing this post. I had made a card last night for Card Patterns Sketch #107. Here is the link to the sketch.
Here is my take on the sketch. 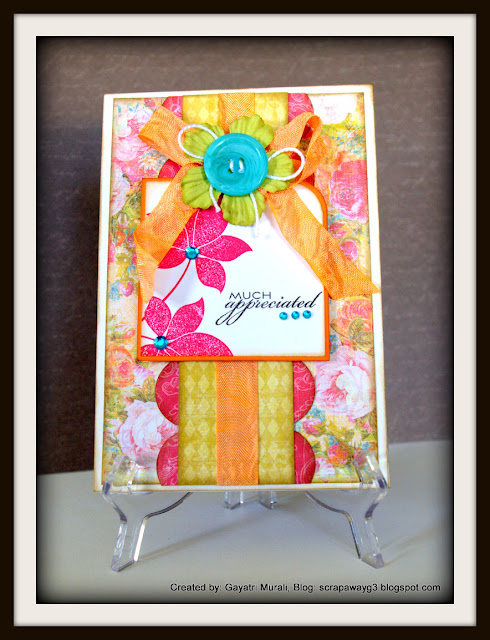 I have used Prima Marketing Annalese pattern paper, handmade wriinkled ribbon, Wplus9 and PTI stamps, Kaisercraft’s rhinestones, Prima Marketing’s flower, PTI’s button and SU’s cardstocks. Love the colors and happy with how it turned out. Hope you like it too 🙂
Have a great week!
Luv!

March 20, 2011 Handmade By G3
Ever since I bought the PTI’s Banner stamp set and dies, I made just one card for last month’s PTI blog hop using them. So when I saw this week’s Waltzingmouse sketch, I made sure I want to make a card using the banner set and die. here is what I came up with: 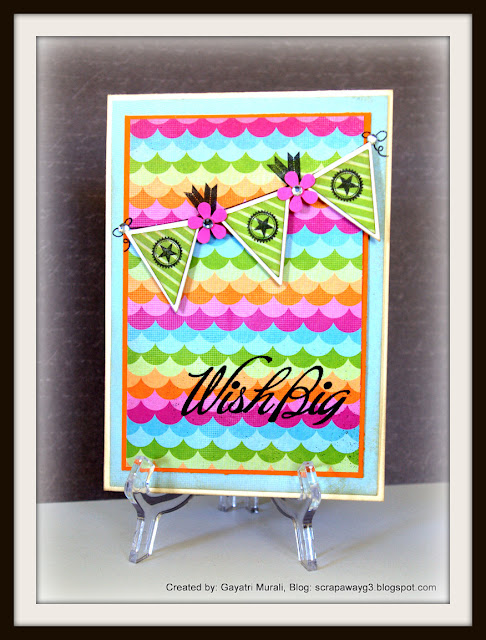 I used Kaisercraft Bubblegum Hills 6 x 6 paper pad pattern papers, PTI’s cardstocks, stamps and banner dies. Edges are inked with Tim Holtz’s Frayed Burlap distress ink. The Wish Big sentiment is embossed with black embossing powder. I love the scallop pattern paper from Kaisercraft’s Bubblegum Hills collection.Actually all the papers are beautiful. Beautiful colors and textures.
Thanks for the awesome sketch. Love sketches. I wish I had longer hours during the day for me to find the time to craft! For those of you who don’t know, I currently have my parents staying with me for two months. So life is busy and exhausting. My DH has taken my parents and kids out today. So I have atleast 4 hours to quickly make lunch, clean and then its craft time 🙂  Have a great weekend!
Luv! 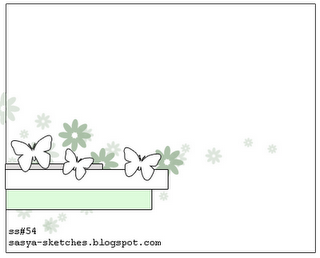 Here is my take on the sketch. 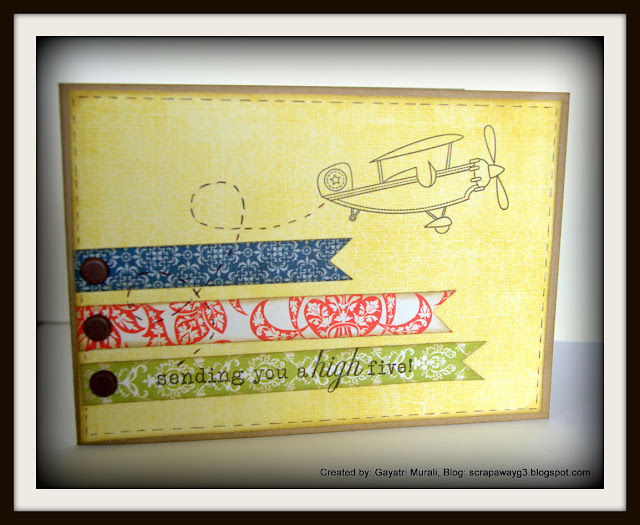 If you like to play, then click here to go to Sasya Sketches blog and play along. There is of course many more inspirations from other DTs. All the best 🙂

Have a great day!
Luv!

March 15, 2011 Handmade By G3
Wow! I managed to make a card for Papertrey Ink’s Make It Monday-Impression Plate Trick #1.I had just half an hour in the evening. I sat down to make a card using one of the challenge sketches for this week but ended up making this card for Make it Monday! Here is my take on the challenge: 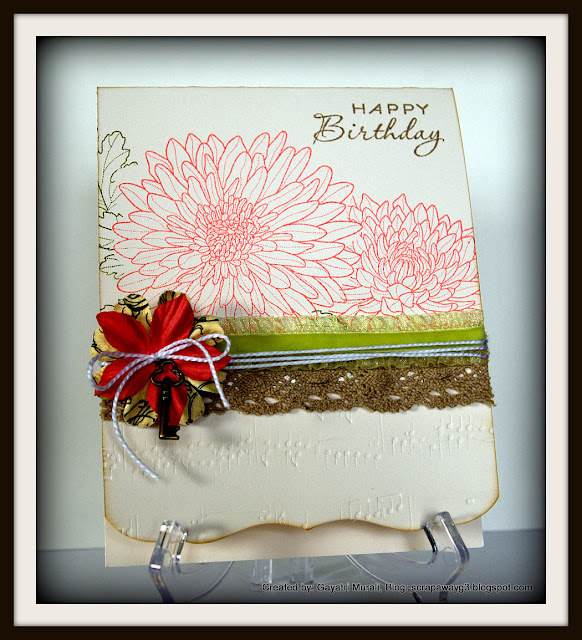 I have used PTI’s edger die and then the music impression plate to give some texture. Then very lightly rubbed Tim Holtz’s distressed ink over it and more on the edges of the card base. On the top 3/4 of the card, I stamped PTI’s Mums stamp and leaves. I then layered with Kaisercraft lace, Prima ribbon, floss and Prima flower. Sentiment is also from Papertrey Ink.
The card came together quickly. Love this card. One of my favourite. Hope you like it too 🙂
Got to make dinner now. Have a great evening!
luv!